What Photoshop Can do for You

If you read Cynthia Tinapple’s blog PolymerClayDaily you will be familiar with the way Cynthia displays the work she shows on her site. The entire background is white. Cynthia does this so the viewer will focus on the art without being distracted by the background. I do the same thing with some of the images I post on my site and elsewhere.

Today I wanted to feature a photo of some beads Jan Montarsi made with his scraps from my Kaleidoscope Pendant Workshop on my Facebook site. I thought the beads were quite amazing and I loved the way he left them on the pins for the photo. However, I felt the beauty of his beads didn’t come across as it should in his flicker photo. 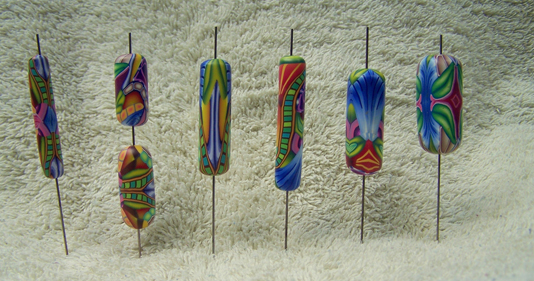 So… I made some changes in Photoshop. After my changes this is what the photo looked like (both photos are the same height and resolution).

I posted this photo on Facebook just about an hour ago and already it has 46 “likes.”  What did I do? … I

The fact that this was a very high resolution image to begin with made it possible to do the above manipulations without any obvious artifacts of the process in the final image.  I always shoot my photos at the highest resolution the camera permits. I don’t reduce the size of the image file until after all other changes have been made.

The hardest part of this was selecting the carpet in the background in order to delete it. Cynthia Tinapple describes how she does it in her StudioMojo newsletter. You can also find information using Photoshop’s help button. It would have been much easier to have selected a plain cardboard background, though; something to think about when you set up your photo.

16 Responses to What Photoshop Can do for You