I have always loved collecting rocks and minerals. One of my favorite minerals to find is mica. Mica is responsible for the sparkle in granite and many other rocks. It mostly occurs as little tiny flakes but sometimes it occurs as pure chunks of layered mica sheets. As a child, when I was lucky enough to find such chunks I would use a needle to separate the transparent sheets, trying to obtain the largest and thinnest unbroken sheet I could.

I’ve been thinking about mica a lot lately because I’ve been working with the Premo metallic/pearlescent clays and it is the mica in the clay that gives it its opalescent sheen. I’m trying to figure out what combinations of Premo colors will give me the best results from my new mokume gane technique.  This is what my work area looks like right now: 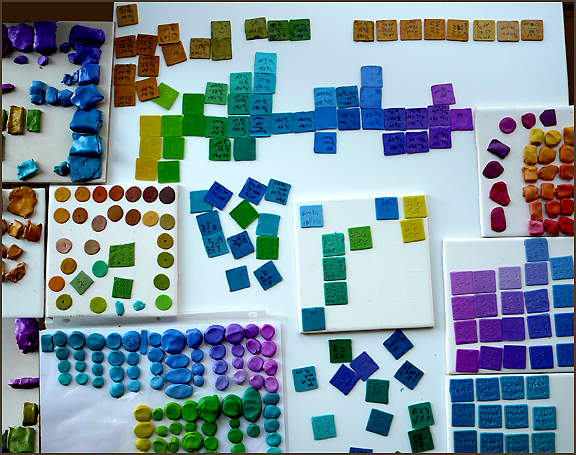 Most of the time I mix my colors instinctually (by trial and error, without measuring anything) and get both good and bad results.  I don’t try to keep color “recipes” for myself. Now, however I want to be able to share what I’ve learned with others so I’m trying to quantify the composition of my favorite blends. In the rest of this post I’ll be referring to the metallic/pearlescent clay as mica clay and clay without mica as ordinary clay.

When mica clay is run through the pasta machine the mica platelets become aligned so that the flat sides of the platelets are oriented towards the top and bottom of the sheet. It is the light reflecting off of these platelets that gives the clay its opalescent shine. If you were to cut into the sheet and look at the edge it would appear darker than the top because you would be looking at the edges of the platelets which reflect very little light. This characteristic is called chatoyence or chatoyency in the polymer clay world. 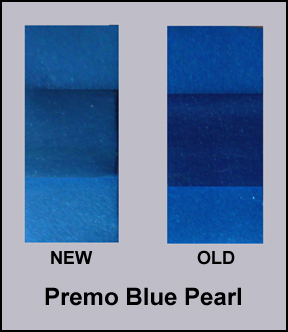 To evaluate the chatoyency of the different Premo mica clays, I rolled the clay through the pasta machine several times to align the mica platelets horizontally. I then stacked the sheets and cut a slice vertically through the stack. I lifted and repositioned the slice so that the cut side faced up; then I placed it horizontally on top of the stack. I evaluated chatoyence as the degree of contrast in value between the slice and the original block.

8 Responses to Premo Mica Clays: Experiments with Chatoyence Part I