Among the most prized pieces in my polymer collection are these bargello beads made by Laura Liska. I love the desaturated color blends and the rich texture she created by leaving gaps between the raised strips of color. I wanted to buy them all but my funds were limited so these are all I have.

Several years later, after Laura had stopped working in polymer, I tried to make my own. I wasn’t able to recreate the richness of her color blends nor was I able to manipulate those tiny strips of color (the round bead is just over 1 inch across and there are 15 tiny strips on it) without distorting them. Achieving Laura’s even spacing between the strips was way beyond my abilities (and probably still is) so I gave up.

Lindly Haunani and Maggie Maggio have done us all a great service by providing instructions for making these beads (with Laura’s permission) as a project in their 2009 book Polymer Clay Color Inspirations. Especially useful is the information on how to use “mud” to produce beautifully shaded color blends. 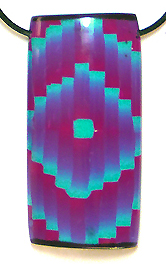 I returned to working with bargello designs when I started casting about for things I could do with Skinner Blends I already had on hand.  This time, after I stacked my blends I sliced the stack into very thin sheets and then into narrow strips . (Yes, I used my slicer.) I arranged these strips like fabric to create flat bargello patterned veneers to put on pre-formed pendant blanks.

The pendant on the left was my first effort.  It is a bit clunky looking but it clearly has a bargello pattern.  After that moderate success I decided to tackle a more complex pattern with thinner strips. 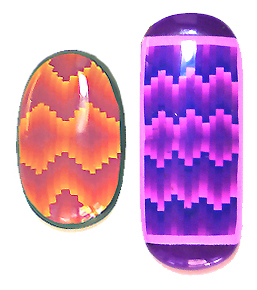 My next two efforts are shown on the right Each pendant is a bit over 1 inch wide..

This is how I made the veneers. I started with a glass surface with a grid underneath it to help me line up the strips. Beneath the grid there was a sheet of white cardstock and beneath that four small blocks of blue ice to keep the work surface cool in my overly warm house.

Next, I laid out the cut strips on my glass work surface. Using a tissue blade (lengthwise) I lifted up one slice and placed it in a different area of my work surface, making sure it was very straight, lined up parallel to the grid and pressed down on the glass. I used my blade to pick up the next strip. (When I picked up the strip, I didn’t slide my blade entirely under the strip; instead I tilted my blade such that I was able to lift the strip by its edge with most of the width hanging off of the blade.) I lined up this strip (still on my blade) with the one on the glass, offsetting the pattern just a bit.  When the strip was in position, I tilted the blade so that the free edge of the strip was pressed against the edge of the strip on the glass, then released the strip with a rolling motion of the blade. The strip came off in the desired position but wasn’t quite straight so I pressed my blade against it to straighten it before adding the next strip.

After I assembled the strips for the veneer, I placed a sheet of waxed paper on top of it and rubbed over it with the back of a spoon to fuse the strips. I trimmed the edges then lifted the veneer with my blade and transferred it to a small piece of cardstock. I slid the veneer off the edge of the card onto the pre-formed (unfired) pendant blank, taking care not to trap any air bubbles. I burnished the veneer onto the blank and completed the pendant.

The picture above is a veneer in progress on my work surface. It is about 1 inch high. When I am constructing my veneers I try to offset each new strip from the one before it by an amount equal to the width of a strip. The zigzag patterns are created by offsetting the strips to the right for several strips then off setting the next ones to the left.

I will be teaching the simplest version of  a bargello pattern as part of my Introduction to Color Blending workshop at Shake Rag Alley School of Arts and Crafts, in Mineral Point Wisconsin on June 2, 2012.